Butterfly McQueen and the Role That Dare Not Speak Its Name 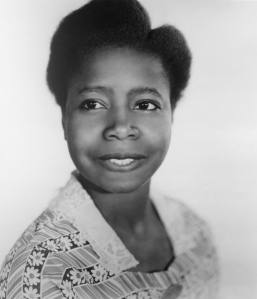 Today is the birthday of the great African American character actress Thelma “Butterfly” McQueen (1907-1995). In her honor, I am not going to talk about or even mention her most famous role or her most famous lines, which tortured and embarrassed her throughout her life. (And torture ME, frankly, every time I hear them as well). If you are one of those readers who simply cannot abide “missing” facts (I like to leave obvious things out sometimes under the assumption that everyone knows them, and/or that they are well covered elsewhere), at any rate, if you are one of those people, out of respect to Butterfly please don’t “fill in the gaps” in the comments here — go yell it into a canyon or something.

And why do I post about Butterfly today? After all, she was not in vaudeville, minstrelsy, tent shows, or night clubs; her background was in legitimate theatre and dance. Her first role was a dancing fairy in A Midsummer Night’s Dream, the origin of her nickname Butterfly. And that’s the point. Despite that fact (and there were lots of others like her, Paul Robeson, Clarence Muse, etc) she needed to make a living in an industry that only had roles for what McQueen called “handkerchief heads”, mostly maids, slaves and other servant parts. Thus her fellow cast members, people we associate her with, were usually drawn from the variety stage, people like Hattie McDaniel, Eddie “Rochester” Anderson, Stepin Fetchit, etc etc. I obviously admire those performers just as much as her, they’re the usual people I write about. But it goes without saying that there should have been a much wider range of legitimate parts for black actors. And in her later years, she did get some other opportunities. Most bios mention her 1979 Emmy for her performance in an After-School special, for example, as almost a footnote (even I’ve done that in this post). Shouldn’t it be at the TOP?

At any rate, after the Role Whose Name We Shall Not Speak, she was in a number of Hollywood classics, including, but not limited to, Cabin in the Sky (1943), I Dood It (1943), Mildred Pierce (1945) and Duel in the Sun (1946). For the most part the roles made her deeply unhappy. After this, she did one all-black feature Killer Diller (1948), and then went over to television, where it wasn’t much better, becoming a regular on the show Beulah starring Ethel Waters (1950-1952) and a couple of tv movies before giving up on tinseltown.

After that, she worked sporadically in the theatre. One of those plays was Gravediggers of 1971, by my friend Barbara Kahn and Ray Hagen, presented at La Mama!

Through these years, McQueen took a series of menial jobs, finally going back to school to earn a degree in political science in 1975. Then, from the late 70s through the the late 80s, she enjoyed a bit of a comeback, getting several television and film roles. Her last was a tv movie adaptation of Polyanna in 1989. Her part — shut up – – was “Miss Priss”.

Which does raise an important point, and I’ve not come across anyone else saying this, so I guess I’ll be the one. She was obviously an intelligent woman — throughout her career she got a reputation for being difficult because she had a hard time forcing herself to do and say silly things. And then she went and got a degree in political science. Right? Not, say, macrame. But another difficulty in casting her, one she doesn’t seem to acknowledge is…the elephant in the room: her voice. It wasn’t a put-on.  Her voice really was that high pitched, squeaky, ethereal, spacey, whatever you want to call it. There’s no way, white or black, that she wasn’t going to be cast as space cadets no matter what she did.  The best she could hope for would be the sort of roles ZaSu Pitts or Billie Burke got – -ditzy women. (Her later good roles were fairy princesses).

But McQueen had to put up with many sorrows and indignities. In 1979 (around the time of her Emmy) she was mistaken for a homeless vagrant and arrested in a Washington DC bus station. (She later sued and won). And she died horribly, burned in a fire while living alone in a cottage at the age of 88. And then there’s interviews like this, which she endures with surprising graciousness: