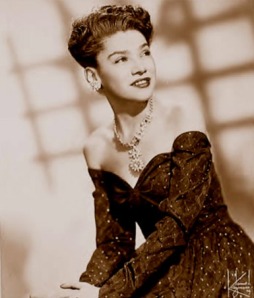 I only became aware of Una Mae Carlisle (1915-1956) two days ago, when I saw her in the film Boarding House Blues (1948) with Moms Mabley, Dusty Fletcher, Stump and Stumpy, the Berry Brothers, et al. I saw that today is her birthday and so she seemed fated for a little post here, even if her path to success was a little atypical. In addition to being gorgeous (see above) Carlisle was a distinctive singer, piano player (she accompanied herself in a boogie-woogie/ stride style) and songwriter. But she never had a period of struggle. She was discovered by Fats Waller (whose piano style she imitated) at age 17 and invited to perform on his radio show, and just stayed. She spent 1936-39 recording and performing in Europe. Returning to the U.S. at the end of the 30s she recorded with the likes of Waller, Benny Carter, Lester Young et al over the next several years. Health problems (a mastoid condition) plagued her increasingly throughout the 1940s. She was forced to retire by 1954. Two years later she was dead.

Here’s one of the tune she performs in Boarding House Blues, “Throw it Out Your Mind”