The Wild Men of Borneo 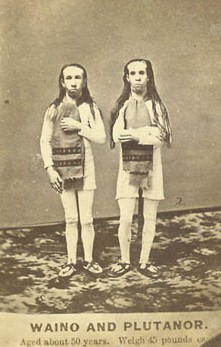 A century ago, a minor show business figure named Barney Davis passed away. Never heard of him? How about his stage name, Plutanor? Nothing? Oh, well. It used to be, a man’s fake name meant something, even if it was imposed on him by a traveling exhibitor!

Barney (born 1827) and his older brother Hiram (two years his senior) were two mentally impaired dwarves who were born and raised on an Ohio farm.  Despite their tiny size (said to stand 4o inches and weigh 45 lbs, although I have my doubts) farm labor had made them strong, endowing them with the ability to lift heavy weights (up to 300 lbs) and to lick much larger men at wrestling. In 1850, their services were obtained by an itinerant mountebank who gave out the story that their names were Waino and Plutanor, two averaged size gentlemen from the exotic land of Borneo, which he seems to have confused with Lilliput. Thirty years later, they were hired for P.T. Barnum’s travelling shows, where they made vast sums of money. Hiram passed way in 1905; Barney in 1912.