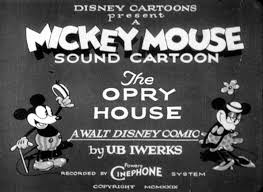 The highlight of my short NYU career was the course I took on Disney taught by the world’s pre-eminent Disney scholar John Canemaker. Two great things happened to me there. I learned that my first cousin thrice removed, the children’s book illustrator Harrison Cady had been an influence on the young Disney. And, two, I wrote a paper in defense of kitsch, helping to establish a career-long crusade!

When you become too big and too powerful you seem to become fair game for haters. I believe it’s only fair to keep things in perspective. While there may be some distasteful things about the modern Disney empire (e.g., the unseemly straight-to-video factory that besmirches their reputation for quality with endless crappy sequels. Bambi 2?! Are you kidding me?). But I feel there is much more to celebrate in this particular instance. You may quibble about the “Disneyfication” of Times Square, but I will take it any day over the crack-den-ification of same. In the long run, the various Disney enterprises are in the harmless fantasy business. Their finest products are full of imagination, and they are mercifully free of boring people shooting each other with guns.

At any rate, like all creatures in nature the Mouse was most charming in its infancy. While the modern tendency is to think of Warner Bros. as the gold standard for animated shorts, in reality they began in imitation of the true pioneer, who launched his company as early as 1923. What are the names “Looney Tunes” and “Merry Melodies” but rip-offs of “Silly Symphonies”? At any rate, Walt not only personally designed the look of Mickey, but supplied his voice until 1947.

Now that I grapple with this, there are about 500 posts all occurring to me at once that I could write about Disney and the doings of his company in the near-half-century since his death, but probably best to keep today’s salute manageable. Here’s a clip from the 1929 short “The Opry House”:

To find out more about show business consult No Applause, Just Throw Money: The Book That Made Vaudeville Famous, available at Amazon, Barnes and Noble, and wherever nutty books are sold.