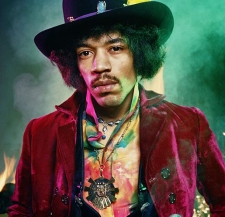 Today is the birthday of Jimi Hendrix (1942-1970). About five years ago when I gave a talk in Seattle about  their local vaudeville history, I dropped the bombshell that Jimi Hendrix’ paternal grandparents had been in vaudeville. 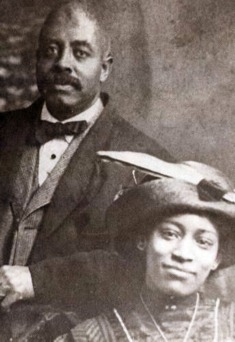 His grandmother Zenora “Nora” Moore, was a half-black, half-Cherokee Georgia native raised in Tennessee. Around the turn of the century she began singing and dancing in the black vaudeville circuits, initially with her sister Belle Lamar, later with a 17 member travelling troupe. It was here that she met stagehand Bertram Philander Ross Hendrix, 17 years her senior. In 1912, the tour finally fell apart and disbanded in Seattle, which is why the couple married and settled down in that region (they lived for many years in Vancouver, although Jimi was born and raised in Seattle).

Zenora was reportedly a huge influence on Jimi, sharing with him her love of music, performance, spirituality, and… flamboyant clothing. Sadly she was to outlive him. Amazingly we have an interview with her recorded in 1970, after Jimi died:

As for Jimi himself, it’s hard to believe a person so remarkable ever lived. The leap from his origins to where he wound up seems to parallel the journey from the Wright Brothers to the moon shots. Hendrix’s poverty stricken childhood and broken home was not at all dissimilar from that of the bluesmen who had come along two and three  decades before him. He wanted a guitar so badly as a child he carried around a broom. Finally he got his hands on a discarded ukulele on which he taught himself popular songs, playing only a single string. Only in his late teens did he get a guitar. Surely such deprivation will inspire fanatical, spiritual devotion. The stakes were so much higher for him.

He began playing seriously professionally after his short stint as an army paratrooper in the early 60s. Interestingly, he started out playing TOBA joints, formerly the black vaudeville circuit, backing up the likes of Little Richard and the Isley Brothers. Even then his flashy showmanship irritated the stars he was supposed to be supporting. When he began to front his own band, Jimmy James and the Blue Flame, he could let his pyrotechnics fly a bit more, playing the guitar with his teeth, behind his back, under his legs. Later, after the formation of the Experience and a baptismal stint in Swinging Mod London he would cop moves from Pete Townsend, his colorfully-sleeved arms fanning through the air like hummingbird wings.

I find him surprisingly articulate about his art (for someone who largely denigrates language) in this interview with Dick Cavett, about what he hopes to accomplish with his music, what effect he wants it to have on the audience. His spiritual philosophy sounds a lot like Coltrane’s. You may think it odd for someone who loves words as much as I do to agree with Hendrix about the fact that words are meaningless…but he’s quite right. Watch any conversation between two people and tune the sound out, and you will quickly find that no matter what anyone thinks is going on, it’s really about sex (or if you prefer, love, harmony) or, on some level, aggression. Everything else is just seasoning. “All art,” wrote Walter Pater, “aspires constantly to the condition of music”.