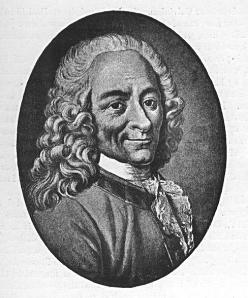 Today is the birthday of Francois-Marie Arouet, better known as Voltaire (1694-1778): champion everywhere of freedom: of speech, of religion, of trade, etc etc. Though he wrote history, poetry and drama as well I’ve only read his satirical prose, works like Candide,  Zadig,  Micromegas etc (mostly because that’s what’s translated and available). When I first encountered these writings in my 20s, with their violence, their grotesquerie, and their unflinching attack on dogma and human cruelty,  it gave me courage, a feeling that certain stuff I wanted to attempt was legitimate, that it could be done. But you know what? It never really gets better. If you want to be a crank, pointing out that Aristophanes, Rabelais, Voltaire, Swift and Chaplin all did this before and are now sitting on the classics shelves, doesn’t help with the bad p.r. a bit.

But therein too should Voltaire be our example. Because, exile and persecution notwithstanding, he did what he did, said what he said, and thought what he thought, right up to his deathbed.