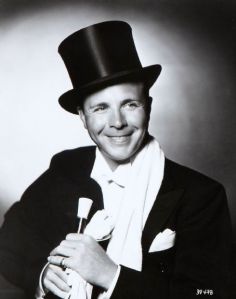 A look today at Dick Powell (1904-1963). An Arkansas native (you can hear it in his accent, which is particularly amusing when he’s supposed to be from Boston), Powell was the son of the head of International Harvester. He spent some time in college, and a short lived marriage to a local woman, but his true love was music. He sang with the Charlie Davis Orchestra before moving to Pittsburgh, where he was an emcee at local presentation houses. 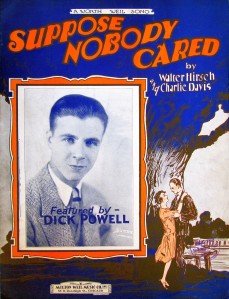 In 1932, scouts for Warner Brothers heard some of his records and signed him to a contract. Here, he became one of their biggest stars in musicals like Gold Diggers of 1933 (and 1935 and 1937), 42nd Street and Footlight Parade. His frequent co-star in these films, Joan Blondell was to become his second wife. 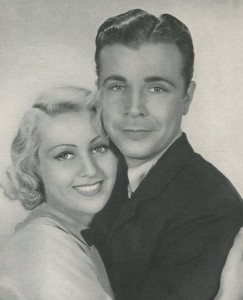 In the 1940s he reinvented himself, becoming the cinema’s first Philip Marlowe in several hard-boiled Raymond Chandler mysteries. (I’ve never bought him in that or similar roles, but apparently audiences of the time did). 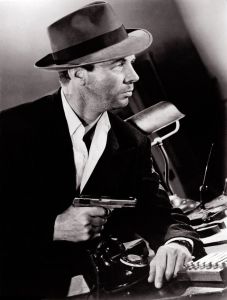 In his last years he became a producer and director, and in fact this may be what killed him at such an early age. One of his pictures was the notorious John Wayne flick The Conqueror (1956) which was filmed in the Utah desert downwind from an above-ground atomic testing site. Within 25 years, nearly half the cast and crew had contracted cancer, and 46 had died of it. Powell was one of them. (So was Wayne, for that matter)

To find out more about show business history consult No Applause, Just Throw Money: The Book That Made Vaudeville Famous, available at Amazon, Barnes and Noble, and wherever nutty books are sold.