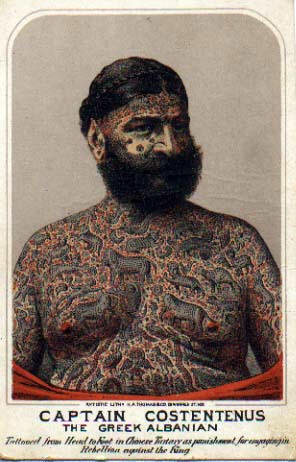 Capt. Costentenus, a.k.a Alexandros Constentenus, a.k.a Prince Constantine, a.k.a George Constantine, a.k.a. Djorgi Konstantinus is often considered the first professional tattooed man, although others came before him. Born ca. 1836, he was a Greek Albanian who claimed to have been a Prince raised in a Turkish Harem, who was later captured by natives in the South Seas who forcibly tattooed him from head to foot. He later admitted, he had intentionally gotten all of those tattoos expressly for the purposes of self-exhibition. Every inch of his body was covered in over 300 tattoos, including his eyelids, the inside of his ear, and his penis. The only part left uninked were the soles of his feet.

He was first managed by the daredevil known as The Great Farini, a.k.a Signor Guillermi Farini, a.k.a William Hunt. In 1873 he began touring with P.T. Barnum’s Great Traveling Exposition and he remained with Barnum through 1879. He continued to perform publicly as late as 1882.