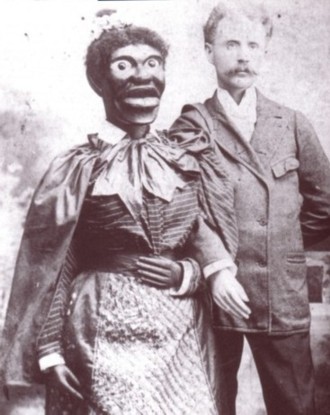 Edward Franklin Sharpless (1872-1937), a native of Marion OH, changed his named to Ed Reynard, a.k.a. The Great Reynard, and became in the words of Joe Laurie Jr. a “pioneer” vaudeville vent and magician, perhaps as early as the 1880s. Nonetheless, I have only been able to gather a few fragments about Reynard. In the 1890s he appears to have partnered in an act called Herbert and Reynard, and there appears to have been a “Herbert and Reynard Musical Comedy Company”. Legendary Hollywood press agent Harry Reichenbach claimed to have gotten his start working for Reynard, traveling around the world with him circa 1904, and describing him as “vain and tempestuous”. Reynard was also the first vaudevillian to buy a long term regular ad in Variety, circa 1906. Towards the end of that decade and the beginning of the next one we encounter reviews of his act. Billed as “the Ventriloquist with a Production”, Reynard apparently had a series of sketches that he produced featuring a stage full of automatons and effects. He supplied all the voices for the automatons himself. The repertoire included “Morning in Hicksville”, “On the Farm”, and “In Court”. These few fragments tantalize but they do not satisfy. We’d be grateful to learn more if anyone can supply additional information!