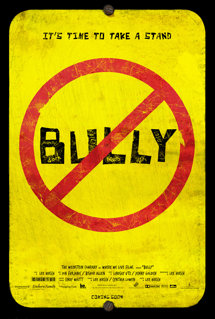 You’d have to have a heart of stone not to feel for the victims in Bully. Lee Hirsch’s documentary follows five families as they struggle with the effects of schoolyard bullying. But while apparently inarguable and straightforward, the film’s subtle skewing obscures a number of nagging questions.

To its credit, the film lets its subjects speak for themselves. A broad range of impacts are represented: two of the families are recovering from the suicides of their sons who preferred to take their own lives rather than face another day of torture at school. One girl is facing 46 felony charges after she confronted her tormentors with her mother’s handgun. Another girl  (an honor’s student and star athlete) has dropped out of school after suffering abuse from both teachers and students when she came out as a lesbian. And the fifth example shows the bullying in progress, a young boy with Asperger’s Syndrome who gets picked on practically every moment of his life.

This last example is the most squirm-inducing…and highly impressive film-making. You have to wonder how the film-makers got this footage of the wanton sadism of children. Was the camera hidden? Or were the kids just blithely, flagrantly monstrous, heedless of the consequences of being observed? Sadly, the latter scenario is all too plausible. It’s the pervasiveness of such cruelty that chills the blood. The movie depicts not only the overt brutality of schoolmates, but the subtler meanness of parents, siblings, teachers, bus drivers and principals. If anything, the statistics the film-makers give out must low-ball the extent of the problem. Isn’t everyone involved at some level?

Which leads to one of my criticisms. The five stories the film examines all take place in the south and mid west, and happened in rural areas and small towns (Sioux City is the biggest population center represented). This might imply that bullying is unique to those regions. But, as we all know, the problem is universal – there is just as much of it (if not more) in the north and in urban areas. (The case of Tyler Clementi springs to mind).

And there are some omissions in the depth of the film’s probing. One of the kids (an eleven year old) killed himself with a gun. Another brought a gun to school; had it gone off, she would have been a school shooter, crossing the line from victim to monster. Bullying is a subset of the larger problem of human violence, which extends far beyond the school grounds. Contrary to what the film seems to imply, it will take far more than a “Stop Bullying” campaign to stop bullying  — it will take a miraculous revolution in every human heart. But the film shines a light on one finite manifestation of the problem, and awakens our sympathy and concern, and that’s a start.