When a girl dies young it leaves a perpetual question mark over her life asking what might have been. For various reasons, Olive Thomas has always been a particularly interesting question mark to me. She was young (but exactly how young is open to conjecture as, to paraphrase Angela Carter, the date of an actress’s birth is often a movable feast), beautiful and had a useful talent for seizing the main chance, holding on, and turning it to her advantage.

Her early life reads like something out of a Dreiser novel. She was born in a depressing, blighted mill-town near Pittsburgh sometime between 1892 and 1898 (most sources seem to split the difference) as Oliva (or Oliveretta) Duffy. Her father died when she was a small child, thrusting the family into brutal poverty in a time and place when the phrase “brutal poverty” really, really meant something. She dropped out of school by 14, got work behind the counter of a department store, and was married to Bernard Thomas by 16. At some point, she left her husband and moved to New York City where she had relatives and got work in a Harlem department store. She charged her husband with cruelty, received a divorce, kept his Anglo name, and never went back.

In 1914 things took a dramatic turn. Legendary illustrator Howard Chandler Christy ran a contest for “The Most Beautiful Girl in New York”. Olive saw the advertisement, ditched work, and won. Or so the story goes. There has been some noise that she met him via a more typical casting call, and the contest was a magazine publicity stunt. Almost immediately, she became a popular and well-paid artist’s model. William Haskell Coffin painted her for the cover of The Saturday Evening Post . She often posed for Harrison Fisher, who arranged a meeting with Florenz Ziegfeld who immediately hired her for the 1915 edition of the Follies. Thomas, however, later claimed she arranged the meeting with the impresario herself. Either way, Flo was smitten, and her career was pretty much made.

She was featured on the main stage of the New Amsterdam for a season, and then was moved to the much racier Midnight Frolic. Legend has it that she carried on an affair with Mr. Ziegfeld, inciting the wrath of his wife, Billie Burke. Angering Glinda, the Good Witch, is never, ever a good idea! This (to use a cliché) meteoric rise has always made me wonder: what was it like and what (or whom) did she have to do? Who did she have to sleep with? Flo, almost certainly. And likely Fisher or Christy. Or maybe not. Was this most glorified of Ziegfeld girls that beautiful? What was life as a chorus girl in 1915 like? Birth control was problematic, tampons hadn’t been invented, and Victorian morality was still the norm. Rumors abound that Olive started posing naked for the lens whilst still back in her backwater in Pennsylvania (possibly pimped out by her sailor brothers, who pocketed her earnings), and one wonders if this helped precipitate her dash for the big city. From what one has read about NYC poverty in the nineteen-teens, what wouldn’t one do to escape if one had the looks and the opportunity? Starving genteelly, honor intact, holds few charms outside of fiction if one doesn’t particularly trust in the Kingdom of Heaven. Aggressively well-read (and upper middle class) Louise Brooks sneered at her fellow chorus girls saying they “…thought Ravel and Debussy was a French bicycle act.” Thomas would doubtlessly have been one of those girls. But, as most people who worked with Thomas would attest, she may have been uneducated, but she was far from stupid.

Much like Louise Brooks would be ten years later, she was swept up by the incipient café society, the Condé Nast crowd of newspaper magnates, socialites and politicians who (according to rumor) bought Olive jewelry worth tens of thousands of 1915 dollars. She wore the most elegant costumes the Follies had to offer. She was covered with balloons in the Midnight Frolic which wealthy industrialists and socialites would pop with their cigars. It must have been unbelievably exciting for her – she was less than two years out of her depressed Pennsylvania town. Movies came next, acting in some serial shorts and making a splash.

She met Jack Pickford sometime in 1916. He was Mary’s bad boy little brother, and from everything I’ve read about him, he seemed like a pretty nasty piece of work. They secretly eloped in October of ’16 (actor Thomas Meighan was the only witness). They had various reasons for keeping it a secret: she thought it would be damaging to her film career if it was perceived that she had traded on the Pickford name, she knew Ziegfeld would be angry and she wasn’t ready to burn that bridge, and his family was opposed. In her autobiography, Mary Pickford wrote that Olive came from “a different world”, i.e. musical comedy, and that they were both just badly behaved children and should wait. I’m pretty sure the phrase “from a different world” is likely code for “that Irish whore”, but maybe I’m wrong. Some people have posited that she opposed the marriage to protect Olive, who though far from innocent, was at this point just a hard working starlet and had never gotten into any real trouble, while Jack was bad, bad news. 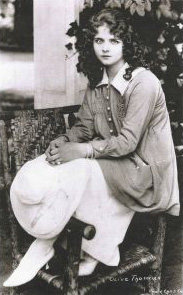 She was quickly signed by Thomas Ince, and made increasingly more important films, becoming a star, and all without any help from the Pickford name or family. She and Jack were often separated by their shooting schedules, and then by his Navy service. They publicly acknowledged the marriage in ’17. Their marriage was characterized by fights, break-ups, lavish gifts sent in apology, infidelity and drinking. They were young, beautiful, rich and famous in a world that had no real scandal machine. It was so early that no one had died yet, it was all seen as good fun and the worst excesses were hidden from the public or glossed over.

In his films, Jack mostly played handsome college boys. Olive was a little more interesting. Louise Brooks and Clara Bow may have been the quintessential flappers, but Olive was the first. She mostly played sexy, yet innocent baby vamps (and a surprising number of jewel thieves). Very few of her films survive, and the only one that’s easily available is her last, The Flapper (1920). In it, Olive is shockingly natural. She still has her Irish good looks, but she appears a little heavy to modern eyes and maybe I’m wrong, but I think you can see her hard living on her face.  She looks far older that she did in her film debut just three years earlier. Her car crashes became something of a running joke in the press (not funny: running over a 9 year old boy, who survived). She and Jack managed to get some time together, renting a house in Great Neck for the summer. The war was over and Jack received a General (as opposed to an Honorable) Discharge from the service. His family connections prevented him from being thrown in jail for pandering (“introducing” pretty girls to officers in exchange for receiving lighter duties) and drug dealing (Jack was a morphine addict like many veterans. The difference was, Jack didn’t become addicted after receiving injuries, just, you know, for fun).

Ince’s company folded due to financial problems and she was quickly snapped up by the Selznick Pictures Company where she was paid $3000 a week, an astronomical sum in 1918. In many of the interviews she made during her film career, she talked about one day wanting to direct. It’s since become a cliché, but it was a far from typical goal for a starlet in pre-1920 films. Her coworkers tell of a voracious curiosity about the mechanics of filmmaking. She made everyone tell her how things worked: how to shoot a scene, how to operate the camera, what about the lights, etc. She was foul mouthed, hard drinking and uneducated, but also bright and ambitious, i.e. much like many film directors (and, lord knows, studio heads) of the era. It’s this more than anything that makes me wonder where her career might have wound up had she lived.

Ollie and Jack decided they needed a second honeymoon in 1920 after all their fighting and time apart, so off they went to Paris. (I will take this time to issue a warning to my readers: if the phrase “syphilitic junky” can be used to accurately describe the person you are married to, THIS IS NOT A MARRIAGE YOU WANT TO BE IN!) According to reports, Jack and Olive’s time in Paris was spent mostly in their usual pursuits of drinking and fighting. On September 9th, after a night of drinking and drugging in the shady dives of Montparnasse, Olive went into their hotel bathroom and downed a bottle of mercury belonging to Jack, used to treat his chronic syphilis. It was an ugly death, and its exact causes are still in dispute. Murder, suicide or accident? My vote is for accident. The label of the mercury bottle was in French, it was on a shelf near headache medication, and Olive was likely wasted. It would have been very easy to grab the wrong bottle and quaff it down before realizing what it was. The only possible motives for suicide that people have put forth are that maybe she had caught Jack’s syphilis, or maybe she was distraught over her failing marriage. The thing is, until then, Olive hadn’t seemed to have a suicidal bone in her body. She was all survival and ambition, she was no little girl lost. And saying it was murder is just silly. She and Jack’s marriage was stormy, but forcing her to drink poison seems awfully unlikely.

Her body was brought back to New York, and she was interred in the Pickford vault in Woodlawn Cemetery. My all-time favorite murder victim, William Desmond Taylor, spoke at her service. Like many Follies girls, Olive had been painted by Alberto Vargas. After her death, Flo Ziegfield commissioned a posthumous portrait. What Billie Burke thought of him having a naked portrait of his dead mistress hanging in his office for the remainder of his life is unrecorded, but one may imagine. Over the next 80 years she was mostly forgotten, interest in her reviving over the past few years due to a Hugh Hefner financed documentary and the Eastman House’s restoration of The Flapper. But the story doesn’t end there – according to many reports, Olive’s ghost haunts the New Amsterdam Theater, no doubt bored at having to watch performance after performance of Mary Poppins.

This post was first published in a slightly different version by Caviglia’s Cabinet of Curiosities.

If you’d like to purchase a print of Olive-inspired art by Carolyn Raship, get it here.

I visited Olive’s final resting place at Woodlawn Cemetery in 2015. She is buried in the Pickford plot: 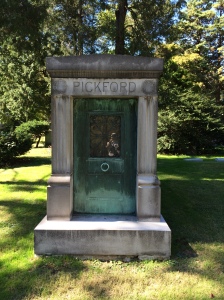