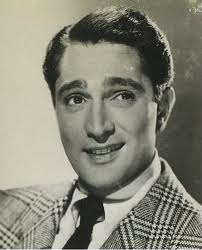 Alda started out as a singer and dancer in vaudeville, then moved to burlesque when vaudeville tanked. His son Alan Alda relates many funny (and disturbing) anecdotes of what the life was like in Leslie Zemeckis’s documentary Behind the Burley Q. Alda the Elda was what was known as a “tit singer” — which simply meant a singer in burlesque.

Alda’s big break was playing George Gershwin in the 1945 bio-pic Rhapsody in Blue. Always a lacklustre screen presence, he nevertheless worked steadily if somewhat unmemorably in film and television for the rest of his life. His Broadway career had more high points, with leads in Guys and Dolls, The Owl and the Pussycat, and What Makes Sammy Run? among others. And he guest-stars in a classic episode of M*A*S*H with his son.

But, most importantly, he is the star of The Devil’s Hand ! (1962) , in which a beautiful witch plucks him from the crowd seemingly at random and gets him to abandon his fiance and sell his soul to the devil God Gamba through the agency of a voodoo cult run by the guy who played Commissioner Gordon on Batman. I love that movie!

And in 1980, there was this surprising product, 99 Ways to Cook Pasta, which he co-wrote with his wife Flora. I learned about it because my mother-in-law owned it! 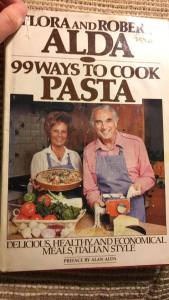