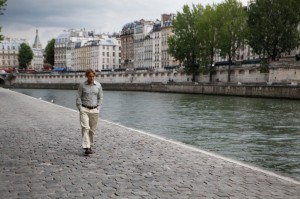 Seeing this movie got put off for awhile because I normally see first run movies with my kids and I assumed this wouldn’t be for them. But we rented it a few weeks ago and it passed the teen test, largely because of the presence of Owen Wilson, and largely because my boys are getting older.

I had some reservations of my own as well. Woody can be repetitive, and the premise here sounds a bit close to territory he has mined and mined and mined before. His worship of the twenties and its leading lights is a kind of sub-theme through all his work (if I see one more deadpan white-on-black credit sequence accompanied by Dixieland jazz I do believe I’ll scream), and he’s done so many of these fantasies where something magically comes true Purple Rose of Cairo, Alice, Oedipus Wrecks, Scoop, etc. This on top of “he’s doing another European city”.

But the whole turns out to be more than just the sum of its parts. This is undoubtedly one of his best films. First of all, he’s not just doing another city in this. The earlier efforts were not really “about” Barcelona and London the way this one is about Paris. This movie is comparable only to Manhattan in the way that the city itself is a character in the film. Beautifully photographed, lovingly eulogized, knowingly referenced. Allen (through his main character) seems to love it in the same way the Lost Generation did, like a beautiful exotic seductress. It is a town infinitely more conducive to the production of art than the land of barbarians he and they left behind.

Our Virgil and our Dante is a writer played by Owen Wilson who is about to enter a very misguided marriage with a horrid, blonde cipher played by Rachel McAdams. Every evening at midnight, about the time when he needs it most, a mysterious antique car shows up like Cinderella’s coach and transports him back to the roaring twenties, where he gets to hobknob with Hemingway, the Fitzgeralds, Gertrude Stein, Picasso, Cole Porter, yaddah, yaddah, yaddah, and ends up falling for a gorgeous bohemian woman played by Marion Cotillard. Wilson is one of the best things about the movie (which has a long list of other virtues). On the one hand, he does excellent duty as one in the growing roll call of Woody Allen stand-ins. Whiney, wishy-washy, intellectual and over-thinky to the point of paralysis. But he has a quality Allen doesn’t have — a corn-fed innocence, a wide-eyed wonder. When these miracles happen, we see them through his eyes and it imbues the film with a romantic magic Allen usually has a hard time achieving as he undermines it with his natural cynicism. And naturally we are brought back to earth. Cotillard’s character, it turns out, has a Parisian golden age of her own: the fin de siècle. Wilson eventually realizes there’s no happy refuge, and that since every time period is someone else’s golden age, he might as well live in the present. It may sound facile, but I feel the message is well calibrated to the here-and-now audience. With domestic and international problems as dire as they’ve ever been, our culture has also never been more under the thrall of the opium of escapism. Your dreams are a nice place to visit, but you shouldn’t oughta live there.