Block and Sully: When You Couldn’t Get Burns and Allen

Jesse Block (born this day in 1900) started out as a child performer in amateur shows and in vaudeville with Gus Edwards, and such acts as “9 Crazy Kids” and “The Sweeties”. From 1922 to 1926 he partnered with Frances Dunlap; in ’26, he teamed up with Eva Sully (b. 1902). They were an extremely popular act in their day. 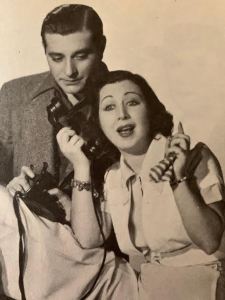 Eve Sully’s lines were so influential they have long outlasted her memory (and many people erroneously attribute them to Gracie Allen): “Some nerve!”, “I’ll say!”, and “I’ll bet you tell that to all the girls!” But despite the obvious rivalry with Burns and Allen, the two couples were fast friends. From the late twenties through the thirties, Block and Sully were mainstays of big time vaudeville, presentation houses, radio, and films like Eddie Cantor’s Kid Millions (1934). Playing the U.S.O. during the war helped them extend their career halfway through the forties, but after that it was the end of the line for the team as performers. Jesse Block became a stock broker. The two continued to socialize with their famous show biz friends until they passed away (Block in 1983, Sully in 1990). There is a great interview with them in Bill Smith’s book The Vaudevillians.

To find out more about vaudeville past and present, including big time acts like Block and Sully, consult No Applause, Just Throw Money: The Book That Made Vaudeville Famous, available at Amazon, Barnes and Noble, and wherever nutty books are sold.