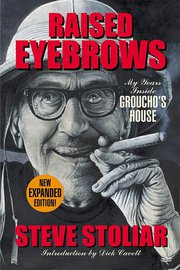 This is part of a little series of post-Thanksgiving mini-posts I’m doing about items you might want to consider as Holiday gifts.

I can’t recommend this book highly enough! One of the best show biz bios I’ve ever come across. Steve Stoliar was a Groucho Marx fanatic as a kid. Then, when he was a young man, a miracle happened: he lucked into his dream job (truth be known, the dream job of many of us): he became Groucho’s personal assistant.

What makes this story so compelling is the high drama. Stoliar was there during Groucho’s last years, and thus had a front-row seat at the battle between apparent gold-digger Erin Fleming (Groucho’s “companion”) and the rest of Groucho’s family, an ugly tussle that took up the last eight years or so of Groucho’s life…and then several years afterward (there was a will involved). It’s the kind of book you just can’t put down.And don’t just take my word — Dick Cavett and Woody Allen think so too!

I’ve had my own copy of this book for years (I unaccountably found it in the remainder bin) but the good news is it’s just gotten a re-print, with updates by the author. It’s published by Bear Manor Media, the same folks who are publishing my upcoming book Chain of Fools (September 2012).

To get your copy of Raised Eyebrows, go here.