The name Georges Méliès (born this day in 1861) is Holy in these annals! 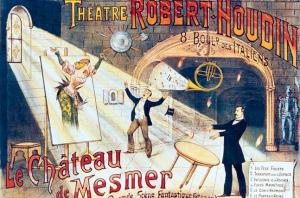 Interested in drawing and puppetry as a boy, Méliès worked as a supervisor in the family boot factory until his father retired in 1888, sold his shares in the company and used the proceeds to buy the Theatre Robert-Houdin. He studied magic, and revitalized his theatre (which was then running out of steam) by devising new spectacles of his own. 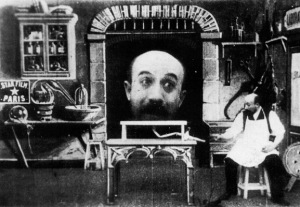 In 1895, he chanced to be present at the first ever screening of films by the Lumiere Brothers. He immediately acquired his own film equipment and began devising short little vignettes to screen at his theatre, magic tricks that were not possible to do anywhere but on the silver screen. In so doing, he invented many special effects we now take for granted: the stop trick (or substitution), multiple exposure, hand-tinting (color film had not been invented), time-lapses and dissolves. He built his own studio for the purpose in 1896. 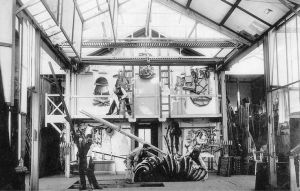 The films were all only minutes long, and took place on a stage (with very few changes of set-up or angle). In addition to his technical breakthroughs, he is to be credited for the influence of his gorgeous, fantastical, and imaginative visuals, much in a league with the visions of his contemporaries L. Frank Baum, Winsor McCay, Fred Thompson, and of course Jules Verne, who inspired some of his work.

World War I devastated Méliès financially, and tastes changed drastically thereafter. Penniless, he went to work selling toys in a Paris train station (as I’m sure you know if you’ve seen Scorsese’s Hugo ) although some 11th hour recognition by his compeers did mercifully arrive before his death in 1938.

To find out more about French variety entertainment, magic and early cinema, consult No Applause, Just Throw Money: The Book That Made Vaudeville Famous and Chain of Fools: Silent Comedy and Its Legacies from Silent Comedy to Youtube.