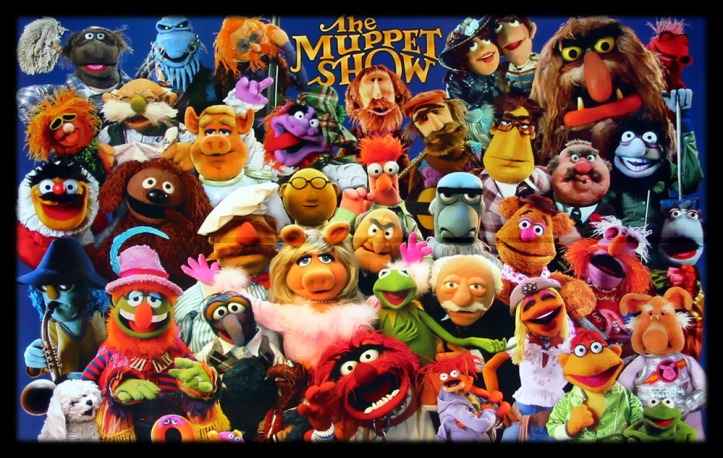 Though he is seldom categorized this way, I think Jim Henson ought to be considered the most successful of all New Vaudevillians. A hippie puppeteer, he was of the same generation, and shared many of the same approaches and sensibilities as The Flying Karamazov Brothers, Big Apple Circus, and scores of other artists and organizations that sprang up in the late 20th century. Henson, who got his start in the mid 50s, was actually on the leading edge of that movement. He’d gotten his start on tv variety shows, including the Ed Sullivan Show. The death of that show in 1971 marked the end of the line for old-school variety (that is variety created by folks who’d experienced the real heyday of vaudeville). 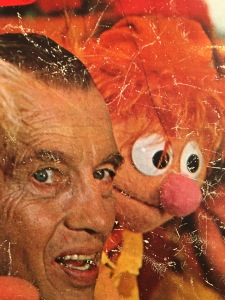 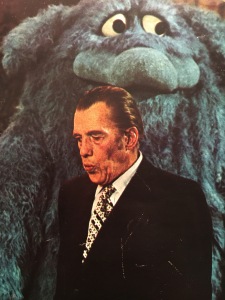 When Henson launched the vaudeville-inspired Muppet Show five years later, it was thus naturally a re-creation, a post-modern tribute. Much like the contemporaneous Gong Show, it was simultaneously nostalgic and modern. It was as much ABOUT entertainment as it was entertainment itself. Indeed, the Muppet Show was less a variety show than a show about a variety show. Such acts as it presented (aside from the weekly guest host) were fictional parodies. But all the vaudeville archetypes were represented: The emcee (Kermit), the diva (Miss Piggy), the hack comic (Fozzy Bear), the eccentric nut act (Gonzo), the accompanist (Rowlf the Dog) and even the stage manager (Scooter), and hecklers (Statler and Waldorf). Did this show inspire me to do what I do nowadays (and in the very way that I do it?) Yes!

Needless to say, I was (and am) an enormous fan of 1979’s The Muppet Movie, which was everything you’d want a Muppet Movie to be and a great deal more. A fictional origin story, exploded with in-jokes and meta-references, and studded with hallucinatory cameos by legendary show biz giants, including Bob Hope, Milton Berle, Edgar Bergen and Charlie McCarthy, Orson Welles, Mel Brooks, Steve Martin, and many others. And full of these great, funny, sentimental songs by Paul Williams — I wore out the grooves of the soundtrack record playing it so much.

After this, though, things changed. The subsequent Muppet movie sequels all seemed dreadful (I never watched more than a few minutes of them on television), and subsequent Muppet television projects were less interesting to me. (Anyone for the Muppet Babies?)

So, at any rate, the concept of a faithful re-boot co-written by and starring Jason Segal held much appeal for me. Segal was actually an infant when the original series went off the air, but he brings a necessary reverence (and just the right amount of irreverence) to the project. Who knows why or how Hollywood occasionally does things right? I imagine the returns from the old way of flogging the Muppet franchise had diminished to the point that the producers would try anything — including integrity — in order to breathe life into it again.

By calling it simply The Muppets, the concept unavoidably evokes the 1968 LP simply called The Beatles. Time to get back to roots, to look for the essence of the thing, and present a restatement. Consequently, the elements we prize so dearly in The Muppet Movie are brought back: a very simple, elemental plot (in this case, one borrowed from Mickey and Judy: “We have to save our theatre, let’s put on a show!), 4th-wall-breaking jokes, and celebrity cameos. That one of these cameos is by Mickey Rooney himself seems an overt wink to the origins of the plot, and the entire spirit of the movie. And above all, songs — terrific, sweet-natured, funny songs, exuding such a simple, positive spirit that I was frankly close to sobbing with happiness within five minutes into the film.

Which brings us to the new element. Something has happened in the 30+ years since the first Muppet film. Children’s films (to say nothing of most Hollywood films and ALL of American culture) have become, to quote Segal’s character in the film “hard” and “cynical”. This is parodied in The Muppets in the form of a reality game show called “Punch Teacher” where children have the opportunity to deck their humiliated teachers, who are trapped in stocks. The Muppets find themselves marginalized while this kind of programming holds sway. The rub is, somehow we all agree that it’s deplorable, but somehow most of us are contributing in one way or another to this cultural catastrophe. Except when we make the choice NOT to do so. For this reason, and a hundred others, I found this movie (like the original Muppet Show) totally inspirational.