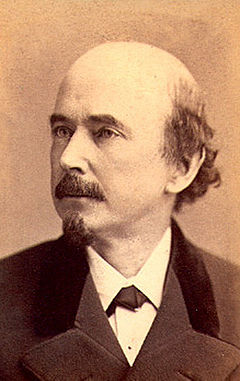 If you’re like me, for the longest time you knew the name Dion Boucicault (1820-90) only as a footnote, or as a lyric in Gilbert & Sullivan’s “I am the Very Model of a Modern Major General.”

In recent times, I’ve had occasion to learn a little more about him, and so I share a few scraps here. A Dublin native, he made his career as an actor/ manager/ playwright in both London and the U.S….meaning Ireland, England and America all get to claim him as part of their histories, and do. His full name is Dionysus! How could he NOT go into theatre? (Or take to the dhrink?)  Some of his plays that might be of interest to a modern audience include:

* In 1852, he also played the title role in a play called The Vampire, 45 years before Bram Stoker’s Dracula. It was based on Polidori’s The Vampyre, which I write about here.

* The Octoroon (1859). This play was revived a couple of seasons ago by Metropolitan Playhouse. I’ve had occasion to read  it a couple of times as research for various projects and have come to know it fairly well. The play is diabolically savvy in the way it manages to (or tries to) alienate neither South nor North in a play about slavery on the eve of the Civil War. The Mulatto was a frequently used device in American drama and literature – a way of calling attention to injustice without seeming to have sympathy for blacks (the  author can claim the sympathy is for the portion of the person that is almost white!) . It is a hedge and a cop-out, but one wonders how much more could have truly been possible given the tenor of the times? The heroine of this play suffers because she is one eighth black. She looks, speaks and acts like a refined Caucasian – indeed she is the daughter of a rich plantation owner (by his quadroon slave). It’s set in Louisiana on a failing plantation that is about to be taken over by an unscrupulous Yankee overseer. On a legal technicality, the heroine, who has lived as a free woman all her life has been put back on the auction block as a slave. Everyone in the play regards this as injustice. The feeling against the villain in this piece is similar to the reaction to Shylock—the wrong is so great, the society is unanimous in its indignation. Confronted with looming rape by the overseer, the octoroon drinks poison. The feeling of injustice undoubtedly would appeal to Northerners. To Southerners, the appeal is the fact that every white character in the play (except the Yankee villain) is benign and sympathetic. For example, they all have affection and fondness for the slave characters, and treat them well, and are all moved when it looks like they will be separated, even bidding to keep them together (unfortunately the historical record doesn’t bear out the reference to this extraordinary “kindness”).

* In 1865, Boucicault was hired by Joseph Jefferson, who’d acted in The Octoroon, to help him adapt the stage version of Rip van Winkle. Jefferson was to star in this vehicle for the next 40 years

* In 1866, Boucicault inaugurates the horse-race genre with The Flying Scud. More on that here.

* In 1874:, he premieres The Shaughraun. See my review of a recent production here.

There are numerous more plays to Boucicault’s credit, many of them more famous then some of these I’ve described; as I stumble upon them in future, I’ll add to this little survey for the benefit of my fellow aesthetic reactionaries.