The Countess in a recent post wrote of seeing The Great Ziegfeld and Rosemary’s Baby on a double bill and not being able to think of a connection between the two pictures. Smartass that I am, I thought of one — or almost did.  Patsy Kelly, the dour bespectacled coven member in the latter movie, had been in vaudeville and revues during her salad days, so I naturally assumed she’d been in the Ziegfeld  Follies. No soap, though; she’d only been in Harry Delmar’s Revels and Earl Carroll’s Vanities.

Kelly’s adorable Irish working class manner was arrived at honestly — it’s who she was. Born this day in 1910, her full name was Bridget Sarah Veronica Rose Kelly. A bit of a tom boy, her mother enrolled her in dance school to feminize her — we’ll soon see how that turned out. At age 16 she was hired as a stooge for Frank Fay. The hiring was ironic; she’d only gone to the audition to back up her brother. Patsy’s earthy working class manner was a nice contrast with Fay’s snooty airs. In their most famous exchange, she entered saying “Sorry I’m late. I was held up at the beauty parlor” and Fay replied, “And you couldn’t get an appointment?” 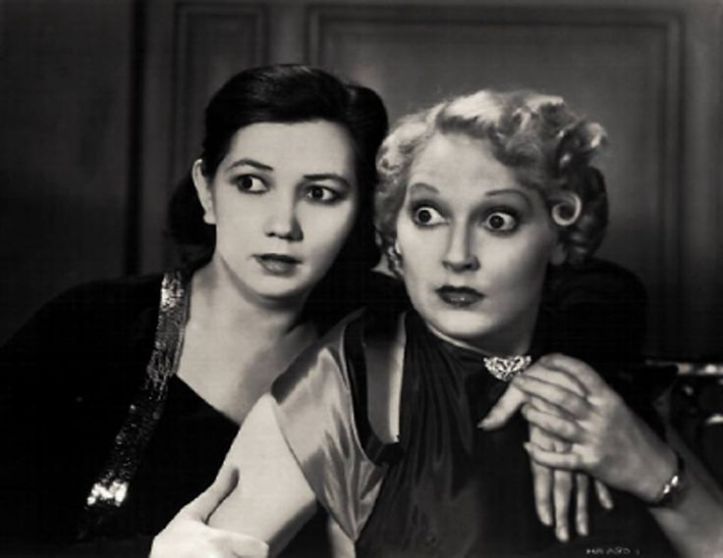 At the end of the twenties, she split with Fay just as vaudeville was drying up. She worked in numerous Broadway revues and then went to Hollywood, where work was also steady. Fans of 1930s comedies know Kelly’s work. She was teamed for a while with Thelma Todd (until the latter’s death in 1935) in a comedy team I swear was a model for Laverne and Shirley, and she had a memorable turns in movies like Pigskin Parade (1936) with Judy Garland (Garland’s first film) and Jack Haley, and 1939’s The Gorilla, with the Ritz Brothers, Bela Lugosi and Lionel Atwill.

Unfortunately, her drinking and her outspoken lesbianism killed her career’s momentum around the Second World War. During the lean times, her main friend and supporter (and reportedly also her lover) was Talulah Bankhead. She worked a lot in television in the 1950s and 60s, and had several Broadway roles in the 1970s. In these later years, you can also see her in such movies as Rosemary’s Baby, Freaky Friday and The North Avenue Irregulars. She passed away in 1981.

To find out more about vaudeville and pioneering comediennes like Patsy Kelly, consult No Applause, Just Throw Money: The Book That Made Vaudeville Famous