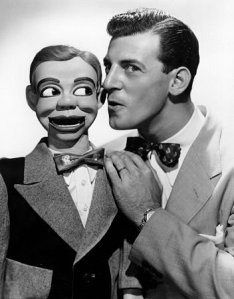 Timing is everything. Having been born in the mid 1960s, I initially only knew Paul Winchell’s voice, instantly recognizable on children’s programs (most of them animated) such as The Banana Splits, The Hair Bear Bunch, Dastardly and Muttley and Their Flying Machines, The Perils of Penelope Pitstop, Wheelie and the Chopper Bunch, and the many Winnie the Pooh specials in which he did the voice of Tigger. Little did I dream that decades previously he had been one of the most beloved and emulated ventriloquists in the land, and the star (with his wooden partner Jerry Mahoney) of his own children’s tv shows.

Winchell was too young for classic vaudeville. Born on this day in 1922, he’d taken up ventriloquism as a child when laid up with polio. At age 15, he debuted on the Major Bowes Amateur Hour and was such a hit that he was booked to tour with Bowes’ traveling road show for five years. In 1949, he was booked for Ed Sullivan’s Toast of the Town — the first of countless appearances by Winchell and Mahoney in the Second Coming of vaudeville. He had a couple of shows his own, The Paul Winchell and Jerry Mahoney Show (1950-56) and Winchell-Mahoney Time (1965-68).  An excellent entree into Mahoney’s pathbreaking work during these years can be found in the documentary I’m No Dummy, reviewed here. And in the ensuing decades, he would also act on countless tv shows, and do voice over work until close to the end of his life.

A frustrated doctor (money troubles had prevented him from getting a degree) he also is credited with patents for several medical inventions, including a design for an artificial heart! Winchell passed away in 2005.

To find out more about variety artists like Paul Winchell and the history of vaudeville, consult No Applause, Just Throw Money: The Book That Made Vaudeville Famous, available at Amazon, Barnes and Noble, and wherever nutty books are sold.