The Many Combinations of the Dooley Family

Several members of vaudeville’s performing Dooley family achieved greater fame in their adulthood, but it makes much sense to treat of them together. They are like a great hub with spokes reaching many other vaudevillians. The father Robert Rogers Dool was born in Ireland, then later moved to Glasgow, where he married Mary Daugherty. (I’ve seen no fewer than four possible birthdates for Dool, between 1852 and 1870. His death in 1922 was well publicized). Dool, who changed his name to Dooley, was a clown in circuses and theatres, as well as a ship board cook. The Dooleys’ first four children William or “Billy” (1882-1921), John or “Johnny” (1887-1928), Rachel or “Ray” (1891-1984) and Mary or “May” (1892-1947) were all born in Glasgow. Later, son Gordon (1899-1930) was born in the US. J. Francis Dooley of Dooley and Sales was apparently no relation. The family first moved to Altoona, then to Philly, then to Camden, where they were based for many years.

As kids, the siblings were booked as a family act in vaudeville, not unlike the 7 Little Foys or the 5 Kellys, respresented by a man named H. Bart McHugh, variously billed as the 20th Century Minstrels and the Metropolitan Minstrels.** The boys were also highly skilled at acrobatic comedy. May was a talented singer. She got married circa 1917, becoming the only one to drop out of show business. The others pursued solo careers and occasionally teamed up.

The eldest, Billy worked in burlesque as well as vaudeville. For a time he is said to have been in act with Frank Orth. He often performed in a team with younger brother Gordon.  In 1917, Billy, Gordon and Ray appeared together in the Raymond Hitchcock produced Broadway show Words and Music (1917-18) with Richard Carle, Marion Davies, and others. In 1919 the pair appeared (sans Ray) in Monte Cristo Jr with the Watson Sisters, Clem Bevans, Chic Sale, Adelaide & Hughes, et al. In 1921 Billy and Gordon appeared together in the Reelcraft silent comedy short Palm Missed. (This Billy is not to be confused with the more famous silent screen comedian Billy Dooley) whom we wrote about here.

In later years, father Robert Dooley often appeared with his sons in vaudeville. This vigorous, acrobatic comedy act seems to have hastened the deaths of two of the partners. Billy expired in 1921 followed an accident in a taxi cab. It appears not to have been a traffic accident. Most accounts describe it as “falling out of a taxi cab”. Initial reports, and polite ones, wrote of injuries to his head and spine from years of performing slapstick. However, later reports mention an autopsy that mentions liver, kidney and heart disease, all of which add up to sound much more to me like another occupational hazard of performing, which happens to come out of a bottle.

A year later, Robert passed away of apoplexy, supposedly from all the excitement revolving to Gordon’s recent marriage to Martha Morton of The Four Mortons. Gordon and Martha performed in George White’s Scandals of 1925, Honey Moon Lane (1926-27), and Earl Carroll’s Vanities (1928) with sister Ray and W.C. Fields (more on her and that below). Sadly, Gordon died young, of pneumonia, in 1930. He and Martha had been slated to make a talkie comedy short at the time.

The most successful of the Dooley Brothers was Johnny, whom Billy and Gordon also supported onstage from time to time. Circa 1910, Johnny performed with minor league ball player Vincent Tydeman in the vaudeville act of Tydeman and Dooley for three years. In 1917 he met Yvette Rugel while working in The Passing Show of 1917. The pair married and performed as a team before breaking up both professionally and matrimonially in 1922. Johnny next’s Broadway appearances were in Listen Lester (1918-19), the Ziegfeld Follies of 1919. In 1920 he starred in a half dozen self produced comedy shorts, returning to Broadway later that year for The Girl in the Spotlight (1920). In 1921, he starred in the film feature Skinning Skinners and appeared in the Broadway show June Love (1921). 1921-22 was a highly eventful time for Johnny Dooley. He lost his father, his brother and his marriage, but he also appeared in Marion Davies smash hit film When Knighthood Was in Flower, and a Broadway show called The Bunch and Judy. Then came George White’s Scandals (1923) and Keep Kool (1924), followed by the films Yolanda (1924) and East Side West Side (1927). In 1928 he too passed away young following an operation for appendicits. This leaves us with our best remembered Dooley. 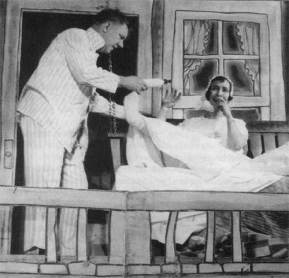 Ray Dooley is best known today as a revue comedienne who, by virtue of her diminutive height, often played babies and bratty children, and was probably a partial inspiration for Fanny Brice’s “Baby Snooks” character. From Raymond Hitchcock’s Hitchy-Koo of 1918, Ray went on to five editions of the Ziegfeld Follies as well as the 1928 Earl Carroll’s Vanities, often performing opposite W.C. Fields.

In vaudeville she was often teamed with her brother Gordon, or her husband Eddie Dowling, whom she married in 1919. She was to co-star on Broadway with Dowling in the shows Sidewalks of New York (1927), Thumbs Up (1934-35) and Hopes the Thing (1948), and the Hollywood film Honeymoon Lane (1931). Dowling became a hugely important man in the theatre. Ray was with him intil his death in 1976, passing away herself in 1984, the only one of the siblings to live to a ripe old age.

Lots of great information for this post was found here.

To find out more about variety artists like the Dooleys, and the history of vaudeville, consult No Applause, Just Throw Money: The Book That Made Vaudeville Famous, available at Amazon, Barnes and Noble, and wherever nutty books are sold.