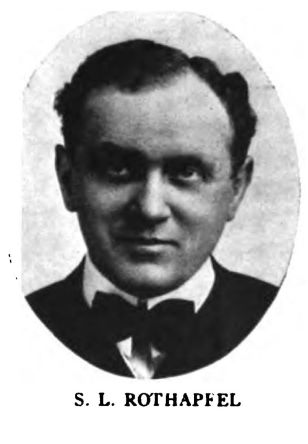 This is the original “Roxy”! In addition to the catchy handle, the brilliant entrepreneur’s most lasting legacies were the two magnificent theatres he created for Rockefeller Center:  Radio City Music Hall and the RKO Roxy. While these were his crowning achievements, there were many more before them.

Born on this day in 1882, the son of German immigrants, S.L. Rothafel started out playing semi-pro baseball, which is where he got his nickname. While bartending at his father-in-law’s saloon, he began to show flickers in an adjoining room. Word of his flair for showmanship got around, and he was soon asked to manage actual theatres. Within two years, he was working for the Keith-Albee organization. Roxy’s knack was for presenting movies on a bill with live performance, usually variety acts. In the 1920s, he managed New York’s Capitol Theatre, one of the early presentation houses, and even had his own national radio show. In 1927, he oversaw the creation of the first Roxy Theatre, which (with its 6000 seats) became a sort of template for the Rockefeller Center houses that were to follow in the early 1930s. The original Roxy Theatre was demolished in 1960. The original “Roxy” died in 1936.

To find out more about the history of show business, consult No Applause, Just Throw Money: The Book That Made Vaudeville Famous, available at Amazon, Barnes and Noble, and wherever nutty books are sold.