Banned in Boston: Memoirs of a Stripper 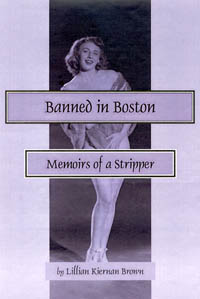 One of the interesting takeaways from the new documentary Behind the Burley Q was the central place Boston (that Puritan city) had in the era of classic burlesque, particularly at the legendary Old Howard. In Banned in Boston, Lillian Kiernan Brown (a.k.a Lilyann Rose) recounts her brief career as a Beantown-based ecdysiast, which began when she was unconscionably young and ended in a Boston courtroom a scant three years later.   While Brown has worked as a journalist, and she does throw in some historical context (the book mostly takes place in the years 1947-50), it reads more like primary source material, and thus is a fascinating, honest, and illuminating peep into the business during its heyday.

While young Lilyann was stepping into the shoes of her mother and three aunts (all burlesque dancers) and often professed to want to be a “star”, she comes across as too nice and naive to have made a go of it in such a shark-infested business, hence her willingness to retire at the request of the authorities and her family — rather than steamroll over them as more obsessed showfolk tend to do. But she matured quickly. When she started the business she still thought babies came from kissing…by the end, jealous rivals were calling her names I won’t repeat on this blog. Along the way, her admirers ranged from young congressman John F. Kennedy to mob boss Raymond Patriarca, and she shared stages with the likes of Robert Goulet and Totie Fields, not to mention her mentor Sally Keith. It’s a real window into a small corner of that exotic, far-off time. Reading it makes one feel, well…like a voyeur.

To find out more about the history of the variety arts, consult No Applause, Just Throw Money: The Book That Made Vaudeville Famous, available at Amazon, Barnes and Noble, and wherever nutty books are sold.