Poodles Hanneford was the greatest comic trick rider of the century, and possibly of all time. He is credited with having done more to advance the art of trick riding than anyone since Philip Astley, the inventor of the circus.

Born in Barnsley, England in 1891, Poodles was the rare vaudevillian who was actually a member of a show business dynasty. The Hannefords are a performing family that can trace their roots at least as far back to 1778 (when one of them juggled for George III) and continue to perform to this day. As you would imagine, the Hannefords are principally circus folk, though Poodles was so successful he made frequent forays into vaudeville, musicals, films, and television.

An aunt dubbed him Poodles, claiming he looked like one (which he did — except for the lack of kinky hair, a long snout, or dog ears). His parents were superb equestrians, and Poodles, who was far from shy, was part of the act from early childhood. His comic talents emerged when Poodles had just executed an absurdly hard routine involving acrobatics on the back of a moving horse (somersaults, handsprings, balancing a table) but the audience somehow managed to remain unimpressed. Apparently Poodles was so good, he made it look like anyone could do it. To remind them that it was hard, he put on clown get up, and began to make his act a bit hair-raising, constantly leaving the audience in doubt as to whether he was about to fall off the horse or not as he careened round the ring. This is showmanship akin to that of Houdini, who stretched out his escapes to far longer than they actually required, or the juggler who always drops a ball for the greater applause he gets when he finally gets them all up in the air. Ironic, but true—audiences are more impressed by men than supermen. 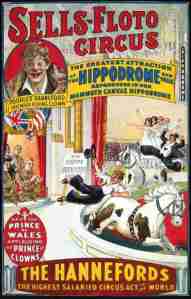 The Hanneford act was soon in demand. Poodles went on to create many of equestrian tricks that still have the power to astound. For example, from a standing position, he was able to do a back-flip from one running horse to another following behind it. He was the only rider who could step off the side of a running horse. He got into the Guinness Book of World Records for performing a running leap onto a horse at full gallop then stepping off again…26 times in succession.

On top of this, he was funny, so that he was soon getting offers in other media. He played in vaudeville many times, but there were few venues large enough to accommodate him. The Hippodrome in New York was one to which he frequently returned. Poodles made 42 two-reel shorts, many directed by Fatty Arbuckle. He worked in films through the 1950s, mostly in bit parts and specialties, notably with Shirley Temple in Our Little Girl (1935) and both the stage (1935) and screen (1962) productions of Billy Rose’s Jumbo. As late as the 1960s, he could be seen on the Ed Sullivan Show and similar TV programs.

Poodles worked the horse act until his sixties, when he began to fall back on his second specialty—bullwhip cracking. In his last years, he and some of his family worked in New York’s fabled and short lived amusement park Freedomland, where he toiled until shortly before his passing away in 1967. Members of the Hanneford family continue to perform at circuses throughout the world to this day , including their own Royal Hanneford Circus. In 1995, he became the only comedy rider ever inducted into the Clown Hall of Fame.

To find out more about the history of vaudeville, including great performers like Poodles Hanneford, consult No Applause, Just Throw Money: The Book That Made Vaudeville Famous, available at Amazon, Barnes and Noble, and wherever nutty books are sold.

Leave a Reply to A Slapsticon Debriefing « Travalanche Cancel reply