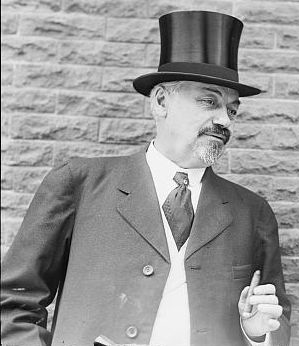 In the Olympia’s Music Hall, where vaudeville was presented, the Hammersteins demonstrated a flair for showmanship unmatched by any of their contemporaries. They managed to make a mint, for example on the Cherry Sisters, an act that has become notorious in theatrical lore as the worst ever presented in vaudeville. This horrid quintet sang off-key, told unfunny jokes, and stepped all over each others toes in dance numbers. Audiences paid good money just to throw vegetables at them.

If all the Olympia had to offer was cheese like the Cherry Sisters, Hammerstein would have been rapidly laughed out of town, or at least down to the Bowery. But, as an opera impresario, he had the rare know-how to offset his tastelessness with doses of taste. Among the class acts he imported for the Olympia Music Hall in the late 90s were French chanteuse Yvette Guilbert, England’s greatest music hall comedian Dan Leno (no relation to Jay), Italian quick-change artist Leopoldo Fregoli.

Despite these world class attractions, the gargantuan Olympia collapsed under its own weight (not literally but financially) and folded after just three years of operation, its various theatres cut up and distributed amongst various other producers.

Hammerstein was down but not out. Without a penny to his name, he began to work his way back, managing to patch together the funds to build a grand new Longacre Square theatre on the other side of Broadway. Opened in 1898, he called this new theatre “the Victoria” in commemoration of his victory over adverse circumstances. (The fact that it also happened to be the name of the century’s most popular human being couldn’t have hurt). For the first 3 seasons the Victoria showcased mostly legit plays and musicals.  In 1902, under the management of Oscar’s son Willie, the format switched to vaudeville, and the Victoria began to truly make its mark.

“If E.F. Albee owned the body of vaudeville, “ said Abel Green and Joe Laurie, Jr. in their book Show Business, “Willie Hammerstein owned its heart and soul”. Will Rogers concurred, “We have never produced another showman like Willie Hammerstein.” Not for Willie this opera nonsense of his father’s. Willie’s philosophy was “the best seats in a theatre for a producer are seats with asses in them.” Distinct among other Big Time vaudeville theatres of the day, a side show atmosphere prevailed at Hammerstein’s Victoria.

From 1902 until shortly before its closing in 1915, the Victoria was the prime showplace of Big Time vaudeville.  Will Rogers called it “the greatest vaudeville theatre of that and all time.” Buster Keaton praised the Victoria as “vaudeville at its all time best.”

Willie Hammerstein harnessed public attention through the more sensational papers of his day, notably Joseph Pulitzer’s New York World and W.R. Hearst’s Morning Journal. Willie invented the freak act, which comprised not only obvious side-show fare like Rahja the snake charmer from Coney Island, but a whole succession of tabloid headline acts as well, such as Nan Patterson “the Singing Murderess”, and “Shooting Stars” Ethel Conrad and Lillian Graham, so called because they’d shot up a dude named Web Stokes. (Such stories later provided the inspiration for the musical Chicago.) In 1913 he booked Evelyn Nesbitt Thaw, one of the original Floradora girls, whose jealous husband Harry K. Thaw had shot famous architect Stanford White, throwing both press and public into an uproar. Fortuitously, during the run, Thaw escaped from prison, pushing box office through the roof.

In 1907, Hammerstein had Gertrude Hoffman, one of his own acts, arrested for indecency, just for the publicity. In 1908, he picked up a stone-faced woman named Sober Sue in Philadelphia, and offered a cash prize to any comedian who could make her laugh. It remained a mysterious and impossible task for many years, though it later emerged that the intractable woman’s facial muscles were paralyzed, making laughter out of the question.

He loved to book famous people on the strength of their fame alone, for he knew that, though their acts could be incredibly lame, their drawing power wasn’t. As such, athletes like Babe Ruth, John L. Sullivan and Jack Johnson; cartoonists like Winsor McCay, Bud Fisher, and Rube Goldberg; explorers like Captain Cook; and Lady Hope and the Hope Diamond graced his stage. He presented Helen Keller as an act. He also presented Sadakichi Hartmann, who gave a “perfume concert” using a special machine that produced the scents of lilacs, and other artificial aromas. He was cancelled after one performance, which is a pity, for I feel certain it would have been the one act Ms. Keller could have appreciated.

Understand that these acts were just the icing on the cake; they gave the place its special flavor. When combined with the requisite assortment of singers, comedians, acrobats, magicians and so forth, it was the best variety show in town. You got your money’s worth at Hammerstein’s. In fact, you got too much. The shows (two daily) were over fours hour long: a matinee from 1:45-6pm, and an evening one from 7:45-12am! Nobody with a life stayed for the whole show.

The other amenity offered by the Victoria was the roof garden, which permitted the management to continue presenting vaudeville shows throughout the summer in those hellacious days before air conditioning. The roof was advertised to be several degrees cooler than street level, though with the sun beating down up there, it was actually many degrees hotter. Willie corrected that effect by heating the elevator that brought the customers up, so that stepping out onto the roof actually felt like a relief.

To the distress of vaudevillians and their New York audiences, Willie Hammerstein passed away in 1914. The Victoria lasted until 1915, when it was converted to a movie house called the Rialto. Oscar I passed away in 1919.

He’s buried at Woodlawn Cemetery in the Bronx. I visited in 2015!

To find out more about  the history of vaudeville, including great impresarios like Oscar Hammerstein I, consult No Applause, Just Throw Money: The Book That Made Vaudeville Famous, available at Amazon, Barnes and Noble, and wherever nutty books are sold.