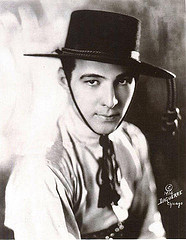 Rodolpho Guglielmi (The boy who would become Valentino) was 18 years old when he arrived at Ellis Island from Italy in 1913. Without a lira in his pocket, he immediately proved he was the smartest young man in these annals by applying for, and receiving, the position of “gigolo”. He was thereby well prepared for his later screen roles. He knew whereof he spoke. Whether or not he bedded his wealthy dates is not within our purview to speculate. However, he certainly danced with them, and did it so well, that he was soon doing it on stage instead of dance halls. His specialty was (surprise!) the tango.

In 1915, he was spotted by Clifton Webb’s old partner Bonnie Glass, and the two teamed up, performing in vaudeville and nightclubs for about a year. After Glass, his partner was Joan Sawyer (who’d introduced the world to the rumba with her previous partner Lew Quinn). Valentino’s touring brought him out to the West Coast, and this is how he and Hollywood discovered each other.

He started out playing bit parts in about 1918. By 1921, he landed the lead in The Four Horsemen of the Apocalypse. The following year, he appeared in The Sheik, and became an unprecedented Hollywood sensation. Women all over the world swooned over this exotic-looking stud who galloped into camp on a camel, snuck into tents by the light of the moon, and then…fadeout until the next morning. Several more such films followed, including his last, The Son of the Sheik in 1926. 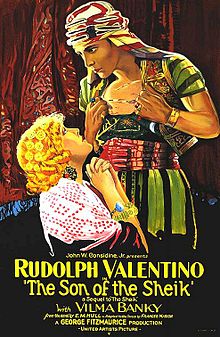 He died tragically at age 31 of peritonitis. 80,000 screaming, howling, weeping women attended his funeral. Valentino was married twice: to Jean Acker and to Natacha Rambova.

To find out more about performers like Rudolph Valentino and the history of vaudeville, consult No Applause, Just Throw Money: The Book That Made Vaudeville Famous. And if you’re a real Valentino fan, my I recommend Donna Hill’s Rudolph Valentino, The Silent Idol: His Life in Photographs, a resplendent pictorial survey, available here.