It might accurately said that a single generation of Herrmanns performed magic onstage for over a century. How is that possible? Because founder Carl Herrmann was born in 1816, his brother Alexander was 27 years his junior, and Alexander’s wife Adelaide continued the family business for over 30 years after Alexander died…until 1932. Along the way, there was a rival Herrmann, Leon (Carl and Alexander’s nephew), the only “next generation” Herrmann to mar the record.

This influential magic family had its origins in Hanover, Germany, and was well established decades before vaudeville ever was. Carl and Alexander were reportedly brilliant magicians, but Alexander, Carl’s successor died in 1896. The real vaudevillians were Adelaide and Leon, who performed together for three years after Alexander died, and then bitterly split. Leon infuriated Adelaide by assuming the mantle “Herman the Great” (which both Carl and Alexander had used), and dressing as the other two had, with the trademark “Satan” look – mustache and pointy goatee. But Leon died in 1909, leaving the field to Adelaide for over twenty more years. So much for women being only the pretty assistant.

The Herrmanns (sans Leon) are buried at Woodlawn Cemetery in the Bronx. I visited in 2015: 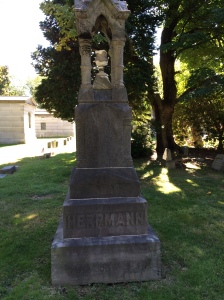 To learn more about vaudeville, including great magicians like the Herrmanns, consult No Applause, Just Throw Money: The Book That Made Vaudeville Famous, available at Amazon, Barnes and Noble, and wherever nutty books are sold.