Ming and Toy (as Transmitted by Jillian Tully)

Born on this day, a minor vaudevillian who had two great shots of national exposure. The first, when the act she performed with her father “Ming and Toy” was captured for a 1936 Vitaphone short; the second when that short was amply sampled in the 1999 PBS documentary Vaudeville.

If you’ve seen the clip (unfortunately I can’t link to it, the PBS folks keep taking it off Youtube) you’ll witness a pretty clear-cut “Yellow-Face” act, a cute, amazingly talented Chinese couple in silk outfits doing stereotypical ching-chong schtick in between musical numbers. The bombshell is that this father-daughter team were – wait for it – Filipino.

While in terms of international fame “Grandma Toy” might have been a minor figure, in the 30 year old life of Toy’s performing grandchild Jillian Tully there has been no one more major. I sat down with Jillian in a Greek diner in Astoria last night and she told me the whole story.

“The legend is that my great grandfather (real name Jose Paguio) came to the U.S. from the Philippines in about 1915 with dreams of becoming a concert pianist. He settled in Jersey City and did manage to find work as a musician,” says Tully. “One day my grandmother came home from school crying about how the kids at school were teasing her and making racist remarks. And Jose’s response was to form a vaudeville act.”

Whether or not the stereotypical act that Ming (a.k.a Jose) cooked up was meant as a subversive commentary on the prevailing attitudes of the times, or if he was just simply “giving the people what they want” will have to remain an open question. Both partners in the team have been dead for decades. All we have now are some facts. The team toured the world, enjoying particular success in Australia, where vaudeville didn’t die for many years after American vaudeville had passed. They toured in various editions of George White’s Scandals and the Ziegfeld Follies. Later, Toy (whose real name was Margie) changed her name to Hoo Shee, and her brother joined the act. They became “Ming, Ling and Hoo Shee, Three Hillbillies from the Burma Road.” Ming played accordion and ukulele and also juggled; Ling played guitar (and apparently sang like one of the guys from the Ink Spots); Hoo Shee sang and danced (some called her the Chinese Betty Hutton). 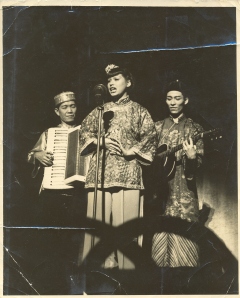 The trio played the so-called Chop Suey Circuit for a number of years until they disbanded, at which point Hoo Shee went solo for a time before retiring to raise a family in the late 1940s.

But how could that possibly be the end of the story? When I say “as transmitted by” in the header to this blog entry, I don’t just mean Jillian’s around to convey some oral history, as valuable as that is. Apart from a few old clips and yellowing mementos, she happens to be the family legacy. The oldest in her generation of grandchildren, Jillian spent the first ten years of her life growing up in Grandma Toy’s house.

“She still had a beautiful voice even then,” says the actress-singer-songwriter-costume designer, “She’d be scrambling eggs and singing ‘Mares Eat Oats’, or the Ella Fitzgerald version of “A Tisket, A Tasket.’ She’d play me those Time-Life cassettes of old radio shows like Baby Snooks with Fanny Brice. We’d watch old MGM musicals on tv, and she’d tell me everything about the shows and about the stars. At bedtime, she’d tell me about her adventures during her touring days until I went to sleep.”

Margie passed away when Jillian was 11, but her dad and her step-dad (both musicians) were mentors to her too. She attended a performing arts high school in West Hollywood, where she received further training as a musical theatre geek, (but hated the competition), before bumming around for a few years. She recorded an album of her songs with her group Rainy Day Assembly, which she dedicated to Hoo Shee. (The cover shows a photo of Margie as Jillian knew her – the former glamorous beauty in a California backyard, hanging the wash on the line). The CD is called “Someone Else’s Story”.

In 2005 Jillian started singing in the New York City subways (usually the West 4th Street stop), though she’s also played venues like the Bitter End and Matchless. She’s appeared in shows like Hair (not the Public’s production) and my own play Kitsch at Theatre for the New City, which is how I first got to know her.

She says she’s the only one in her extant family even remotely bitten by the show business bug. Whether it’s a matter of nature or nurture (or both) must remain an enigma as mysterious and beautiful as a Filipino father and his school age daughter one day deciding to form a Chinese vaudeville act.

But wait! There just might be another performing family member. Jillian says there’s a rumor that her great uncle Bobby Paguio (a.k.a “Ling”) is alive and living in Northern California. None of her branch of the family is in touch with him. If anyone has any leads, please get in touch via this blog and I’ll pass the news on to Jillian. There are so many questions to ask.

To learn about the roots of vaudeville , consult No Applause, Just Throw Money: The Book That Made Vaudeville Famous, available at Amazon, Barnes and Noble, and wherever nutty books are sold.