so little he is

Jimmy Savo’s success was the living embodiment of the evolutionary principle known as neoteny.  With his large, soulful eyes, and dwarfish body, as a grown man Savo might have made an acceptable Oliver Twist. Savo was neither a dwarf nor a midget, just a person of smallish stature, which he accentuated with oversized clothes and a derby hat. And lest one get the impression that he was one of those performers who coast on their physical attributes, no less than Charlie Chaplin called him “the worlds greatest pantomimist”. 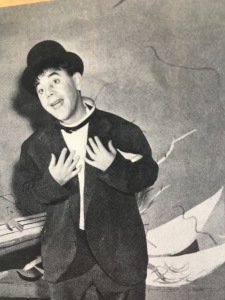 Born the son of a poor Italian cobbler in 1895, Savo grew up in the Bronx. He made his debut as a boy, singing “Wait Til the Sun Shines, Nellie” to his dog at an amateur night. Such pathos was to remain a hallmark of his artistry throughout his career. Inspired by W.C. Fields, he started to juggle at age 6, eventually mastering such feats as chair juggling and balancing a wagon wheel on his chin. In 1912, he made his Big Time debut at Hammerstein’s Victoria, alternating his bookings for several years between vaudeville and burlesque. One of his specialties was using his abilities as a mime to illustrate the songs he was singing, as in “River Stay ‘way from My Door”, where he was able to convey rising floodwaters, or in “One Meatball”, an interchange between a hungry poor man and a stingy waiter.

In 1946, he lost a leg to cancer, but continued to work in nightclubs and on television (mostly from a stool) until his death in 1960.

To find out more about the history of vaudeville, including stars like Jimmy Savo, consult No Applause, Just Throw Money: The Book That Made Vaudeville Famous, available at Amazon, Barnes and Noble, and wherever nutty books are sold.