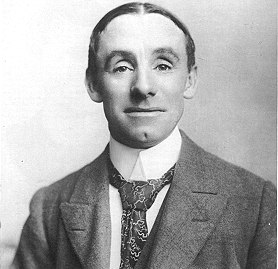 The legendary music hall artist Dan Leno was a major influence on all subsequent British comedians. Born George Galvin in 1860, he made his stage debut at age 4. He became a star of the English panto in such productions as Jack and the Beanstalk (Surrey Theatre, 1886) and Babes in the Woods (1888, Drury Lane). In the 90s, he became a solo artist in music hall. His act would usually involve a little song followed by a character monologue.

He was great at pantomime dames, as when he portrayed this gossipy female:

In 1897, he played his only American vaudeville date, at the Olympia Music Hall, where he stayed for 4 weeks. In 1901, he appeared before King Edward, and thenceforth he billed himself as “The King’s Jester”. His brilliant career was cut short in 1903, when he was committed to a mental institution. He died the following year. While he died too young to have made any film appearances, he recorded several phonograph cylinders, allowing us to hear his vocal artistry a century later.

To find out more about vaudeville and musical as well as the great Dan Leno, consult No Applause, Just Throw Money: The Book That Made Vaudeville Famous