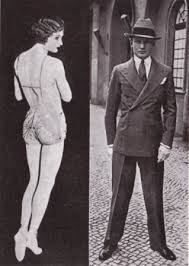 It doesn’t get much more vaudevillian than this. Barbette was a female impersonator/ trapeze artist. Born on this day in 1904 (real name Vander Clyde), he spent his childhood practicing trapeze skills as a hobby. At age 14, he answered a job ad placed the Afaretta Sisters, the “World Famous Aerial Queens”. To get the job, he had to dress as a girl.

Soon he was working solo. At his debut at the Harlem Opera House in 1919, he got three curtain calls though only an opening act. Barbette did slack wire walking, rings, and trapeze…then pulled off her wig for the big wow. Soon he was a headliner—what straight trapeze artist ever accomplished that? 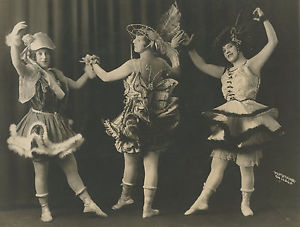 By 1923, he was the hit of the Paris cabaret scene and a favorite of the intelligentsia. Jean Cocteau even included him in his 1930 film  The Blood of the Poet. A character in Alfred Hitchcock’s 1930 film Murder is also clearly based on her. In 1935, he was featured in Billy Rose’s Jumbo along with Poodles Hanneford, and many other circus/vaudeville notables.

A 1938 bout with pneumonia effectively ended his performing career, and he retired to become a consultant and choreographer for projects requiring drag trapeze artists. You think there aren’t any? What about Hollywood films like Til the Clouds Roll By, The Big Circus, and Some Like it Hot? Barbette passed away in Texas in 1973, having lived a life the best of us might envy.

The Texas Historical Commission has recently approved a historical marker to honor the performer. Read that, and more about Barbette here.

To find out more about  vaudeville, including great stars like Barbette, consult No Applause, Just Throw Money: The Book That Made Vaudeville Famous