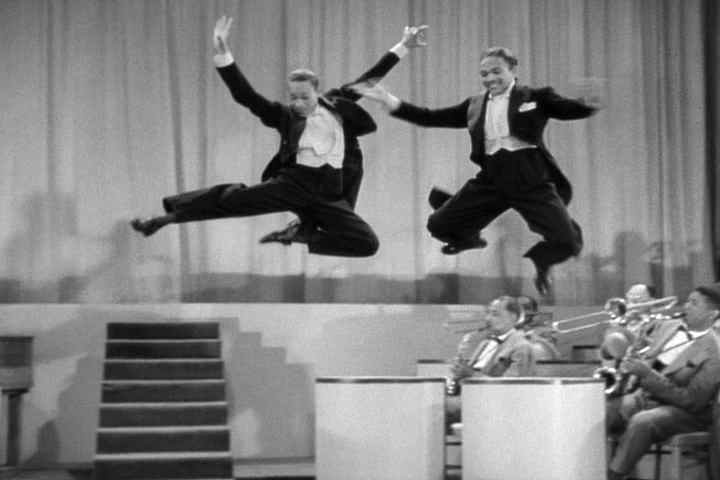 Brothers Fayard and Harold Nicholas (born 1914 and 21 respectively) literally grew up in a vaudeville house. Their parents ran the house orchestra Nicolas’ Collegians at the Standard Theatre, Philadelphia. Fayard recounts watching the shows every day after school. There he saw the likes of Bill Robinson, Buck and Bubbles and Reed and Bryant, whom Fayard called his “first great influence”. Fayard taught himself to dance by watching these great performers and he then transmitted the knowledge to his brother and their sister Dorothy. The Nicholas trademark – the split – was lifted from a dancer named Jack Wiggins. The three made their debut at the Standard in 1930 as “The Nicholas Kids.” Dorothy, who didn’t like the late hours, soon dropped out, but the Nicholas Brothers kept at it and became something of an overnight legend. If you will note the birth dates at the top of this entry you will observe that Fayard and Harold were all of 16 and 9 when they made their debut, but they were already stopping the show wherever they went. Self-taught though they were, the children were clearly prodigies. Leaping head-high into the air, landing in a full split, and then coming up out of the split as though yanked by a giant unseen hand – and all in less time than it takes to type this – such was the stuff of the Nicholas Brothers.

Their reputation proceeded them all the way to New York, where they secured a long-term engagement at the Cotton Club in 1932. Vaudeville by now was winking out. A good many of the vaudeville theatres by this time were presentation houses, but the Nicholas Brothers worked these venues as long as there were engagements to be had. Prestige dates followed through the thirties: Lew Leslie’s Blackbirds in London (1936), The Ziegfeld Follies of 1936, and the Broadway show Babes in Arms (1937) where their choreographer was Balanchine.

They both longed for movie stardom, and indeed, did work in many Hollywood films in the thirties and forties – but it was almost always a dance turn. They rarely got a chance to prove that they could act, or that they could carry a picture as the stars they were. Eventually, the team split, with Harold working in Europe and Fayard in the U.S. In 1991, they were given an award by the Kennedy Center.

The gentlemen were very present in the PBS American Experience Vaudeville documentary. Harold Nicholas (who died in 2000) in particular comes across as a justifiably bitter man. His brother Fayard passed away in 2006.

To find out more about the Nicholas Brothers and vaudeville, consult No Applause, Just Throw Money: The Book That Made Vaudeville Famous, available at Amazon, Barnes and Noble, and wherever excellent books are sold.