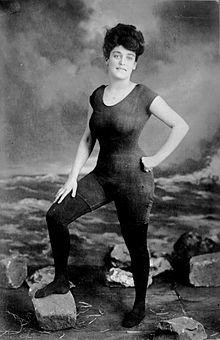 A weakly child, Kellerman took swimming lessons to strengthen her muscles in her native New South Wales, Australia. By the time she was 15 she was an a regional and national swim champion in several categories. This led to lucrative income from swimming and diving exhibitions and participation in water shows of various kinds. She was performing mermaid routines as early as this

In 1905, she dealt Victorian era culture one of its many death blows by inventing the one piece woman’s bathing suit. This at a time when women wore bulky bathing dresses and pantaloons into the water. Naturally in competitive swimming you want as little drag as possible. But Kellerman’s invention became universally adopted (until the skimpy two piece came along a half-century later). This was epochal. Even in burlesque at the time women weren’t showing that much skin, and the outfits weren’t form-fitting. Tights were worn in burlesque but normally the legs were normally at least partially obscured by the fabric of a dress or skirt. Kellerman was at the crest of a tidal wave of looming change.

After conquering Australia, Kellerman gave aquatic exhibitions in the western European capitals. By 1907, she was in the U.S. In what may have been a publicity stunt, she was arrested on Revere Beach, Boston for wearing her one piece suit. The publicity resulted in lucrative bookings in big time vaudeville, fairs and amusement parks. What did she do for an act, you wonder? She dove into a glass tank. She swam. She pretended to be a mermaid. She ate a banana. But mostly she just wore her famous one-piece bathing suit. For audiences of the time, that was enough. 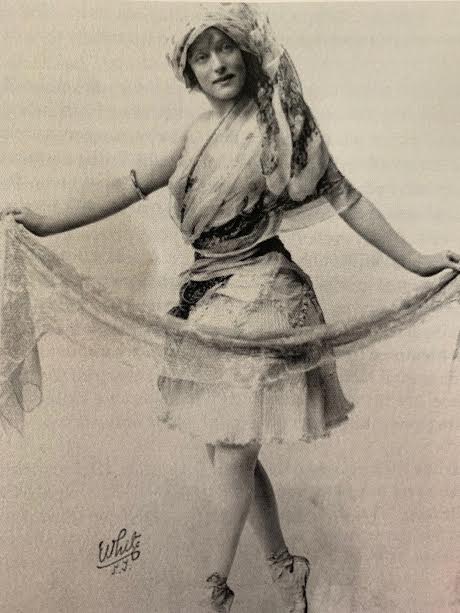 Edward F. Albee is said to have had special mirrors built on the stage so the audience could see her “backside”. This filled houses. Writer Robert Grau called her “The Queen of Modern Vaudeville”. In 1908 she was featured on the cover of Variety. She headlined on America’s stages for over a decade. To stay in demand, she kept adding new skills to the act: wire-walking, diabolo, singing, fiddle playing and even impressions. In 1911 she starred in her one and only Broadway musical, Undine, in which she played a mythical water sprite. After a successful four month run, it moved to the West End.

But wait! There’s more! Because she was in films! Over two dozen of them! Most of them were during the silent era. About half of them are newsreels where she is just captured in the act of swimming, but fully a dozen of them are proper stories where she plays a character who does a lot of swimming for some reason. And as you can judge from some of the titles of the films, it wasn’t as hard as you might think: The Mermaid (1911) Siren of the Sea (1911), Neptune’s Daughter (1914), Queen of the Sea (1918),  Venus of the South Seas (1924).

If that sounds a lot like the output of Esther Williams, it is — and furthermore, as I bet you know already, Williams was to PLAY Kellerman in the 1952 bio-pic Million Dollar Mermaid.

To find out more about the history of vaudeville, including performers like Annette Kellerman, consult No Applause, Just Throw Money: The Book That Made Vaudeville Famous, available at Amazon, Barnes and Noble, and wherever nutty books are sold.