Mae Irwin spent her career alternating between the legit theatre and vaudeville, but her most lasting legacy is the fact that she is one of the first vaudevillians (make that one of the first people) preserved on celluloid, in the 1895 flicker The Kiss. The film captured her for a brief moment in her starring role in the show The Widow Jones, opposite John C. Rice. That was the whole film, just the kiss. Talk about cutting to the chase!

Born in Whitby Canada in 1862, she started out singing in the church choir. She debuted with her sister in a straight show at the Adelphi Theatre in buffalo in 1876. The pair worked as “coon shouters”** (an unfortunate term of art back then) and toured the Midwest. Tony Pastor spotted them in Detroit and brought them back to work at his Metropolitan Theatre in New York the following year. In 1883, May was booked as member of Augustin Daly’s company, where she starred for many years. In 1907 she returned to vaudeville, capitalizing on her skill and reputation as a low comedian, and her commodious, matronly body. She continued to work both vaudeville and the legitimate stage until retirement in 1920. 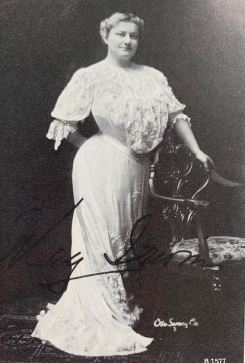 Douglas Gilbert recounted one notable occasion when she stepped out of retirement, however. At age 70, she was called frantically and begged to substitute for a performer who’d gotten sick at a benefit show. At that point, Mae a wealthy old woman who’d been out of performing for well over a decade. She told three stories and sang a song called “The Bully” and brought the house down.

To find out more about these variety artists and the history of vaudeville, consult No Applause, Just Throw Money: The Book That Made Vaudeville Famous, available at Amazon, Barnes and Noble, and wherever nutty books are sold.